There are those people out there who swear by guns as the primary form of self-defense that everyone should have. There’s no doubt that guns have worked as self-defense in some circumstances, but there are times when it’s definitely not the answer. Here are a few ways in which a martial art is the better option.

You Can Take Your Martial Art Anywhere

Even with a concealed carry permit, there are places where you won’t be able to take a gun. Schools are a good example, as well as airports, sports stadiums, and any other place that has metal detectors. No one can make you leave your martial art at home, so you’ll have your self-defense skills with you no matter where you go.

You Can’t Drop Your Martial Art

One of the biggest negatives about owning a gun is that it can be used against you. If you are in an altercation and your unarmed assailant grabs your gun, you’re suddenly dealing with an armed assailant. You can’t drop your Muay Thai or BJJ!

No One Ever “Muay Thai’d” Themselves in the Foot!

Practicing with a Gun Doesn’t Get You Exercise

You can become a better shooter as you shoot your gun more, but you’re certainly not getting much exercise. When you participate in Muay Thai, Brazilian Jiu-Jitsu, or any of our martial arts classes you’re making your body healthier.

You Don’t Have To Get A License 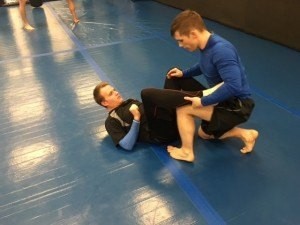 Guns might have their place, but martial arts training is a much better option for just about every person out there. Ready to get fit while learning self-defense? Check out our martial arts classes here and find the class that’s right for you.