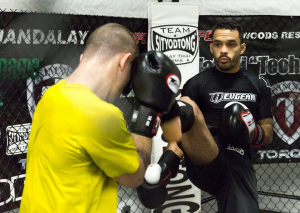 Jiu Jitsu, later to evolve into Brazilian Jiu Jitsu (BJJ), started with Japanese villagers who were opposing the Samurai. Because striking such an armored opponent would be useless, they developed a way of using an opponent’s strength against them by employing joint locks, pins, and throws. Striking is not a part of BJJ and offers ways of subduing an opponent even if they are substantially stronger than you.

Our self-defense classes are another great way of learning how to defend yourself. It uses the fastest, most efficient ways of getting your out a situation when your life is threatened. You’ll learn offensive moves, but it’s called self-defense for a reason.

If you’re more interested using strikes to come out on top during sparring or to incapacitate your opponent, Muay Thai Kickboxing is for you. Here you’ll be using your arms, elbow, knees, and shins to get an advantage over your opponent. While Mixed Martial Arts uses many moves from BJJ, it’s also considered one of the offensive martial arts.

What you’re hoping to get out of martial arts classes often helps decide which one if for you. If you need help deciding, contact IMA today!