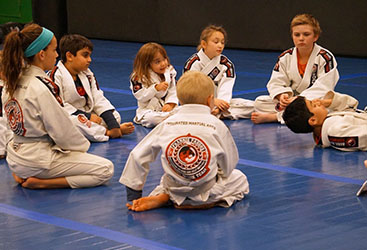 We’re very happy to be able to offer kids martial arts classes to children throughout the Westborough area. It gets kids exercising and teaches them some excellent life skills. But you probably won’t be surprised to learn that our martial arts classes for kids aren’t exactly the same as our adult MMA, kickboxing, and BJJ classes. Here are a few of the most obvious differences.

Our kids’ martial arts classes are much more than just “karate for kids.” Children will learn the basics of many disciplines, including Brazilian Jiu-Jitsu, Muay Thai, Karate, Hapkido, and Taekwondo. This gives kids a taste of which martial arts they like best. If they’re a fan of grappling, they might be more apt to take Brazilian Jiu-Jitsu classes when they grow up. If striking is their forte, mixed martial arts might be their choice later in life.

Children might not be walking down a dark alley at night…but they might be walking down that same alley right after school and be approached by the school bully. Our classes will teach conflict resolution, whether that means talking their way out of a fight or using self-defense to get themselves out of a tough situation.

When adults take classes at our martial arts school, they’re very focused (probably because they’re paying for the classes themselves!) But kids can be rambunctious in the class, and we use it as a good opportunity to learn self-control (so that they don’t hurt anyone), discipline (so that they do what’s expected of them), and respect (so that they learn to listen to instructors, something that can also carry over to their school teachers).

The kids’ martial arts classes at IMA are formulated specifically for kids so that they’ll get the most out of them. If you think your kid would be a good fit for our classes, check out the schedule here.