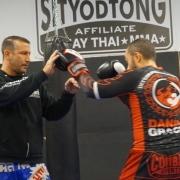 One of the highest-ranked foreigners ever to train at Sityodtong, Kru Mark was personally given the blessing of Kru Yodtong Sennan to help spread authentic Muay Thai training to the United States. Through Sityodtong USA, Kru Mark continues to share Muay Thai with students of all levels, both at his gym in Somerville, and through affiliates like Integrated Martial Arts. Taking a martial arts class with Mark is truly an educational experience.

Kru Mark has earned a reputation as a world-class MMA coach, working with numerous UFC veterans, as well as developing his own team of mixed martial arts fighters. He is well known for his skill and ability to craft training camps and strategies perfectly tailored to each fighter. Today, in addition to coaching UFC fighters like Rob Font and Tony Martin, Kru Mark works directly with the UFC production team.